Building muscle and training on machines 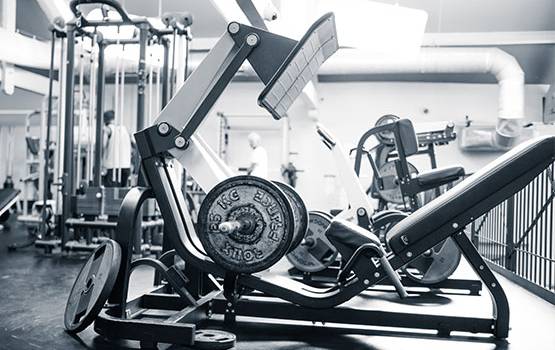 Many men are desperately fighting for more muscle packages. Some people already find it difficult to start and some others make good progress, until suddenly they’re unable to continue.

There is then often great despair, and not infrequently trainers then resort to ineffective, overpriced and not infrequently even unhealthy supplements. In most cases, not lack of motivation, but ignorance is the problem. And often the health of one's own musculoskeletal system is negligently put on the gamble for muscle mass.

Most amateurs and, unfortunately, some of our long-time contemporaries are more than happy to use machines in their training. This brings with it some disadvantages. In machine training, the muscles or muscle groups are usually trained in isolation, for example, when tight rowing on the machine, although the upper back is heavily challenged, but from the gluteus down the body falls into a deep sleep.

On the one hand less energy is burned, on the other hand the ability of the muscles to work effectively together. Also, less testosterone is released during machine training than in well-designed strength training. Testosterone in turn promotes muscle growth.

Rarely do you see strength athletes doing their basic exercises these days and even more rarely you can see a correct execution. However, the basic exercises, as the name suggests, form the basis of every weight training program. The four basic exercises are divided into two directions of movement, "pushing" and "pulling". There is one push and one pull exercise for upper and lower body. The push exercise for the lower body is the squat, the pull exercise the deadlift. For the upper body, the push exercise is either the bench press or the Military Press and the classic pull exercise the pull-up. Any muscle building program should be based on these basic exercises and their variations, first, because of the effectiveness of these exercises in terms of muscle growth, as well as from the point of view of physical health. As mentioned earlier, the problem is not just by knowing that these exercises are part of the program, but knowing how to do them correctly.

Let's take a look at a few things that are important in a squat. And the first question we should ask ourselves is: Which muscles do we want to train at all? Most of them will probably think "The legs, it's clear!". Unfortunately, that is far too general. A squat is done practically only by two joints. The hip, and the knee joint. Now it's important to know that we have three muscle groups that stretch your hips, but only one that stretches your knee.

Combined with the knowledge that the hip can withstand much more stress than the knee, it should be clear that the hip should also be more heavily loaded. This affects knee and hip position in the squat, as well as the position of the barbell on the back.

Since our aim is to balance the barbell over the midfoot and to guide it down and up in a straight line, we should choose Lowbar Squats, where the rod is low on the back, as the preferred variant.

This ensures that we put more strain on our hips in relation to our knees and, in the end, distribute the power equally to the muscle groups involved. Phew! So many considerations only for a squat! Honestly, this was just a small selection of the considerations one should look at before training; at least as many follow on the subject of deadlifting, bench press, military press and chin-up. But the goal is not to describe each of these exercises in detail in this article, without corresponding figures, this probably only led to misunderstandings anyway. They rather want to show that training is a science in itself.

In addition to basic knowledge about the anatomy and functioning of the body as well as about nutrition, individual factors come up. Everyone is different and not everyone can work the same way and feed the same way. Often, flexibility or strength deficit must be addressed through appropriate exercises to maximize the effectiveness of each individual workout. This requires a lot of experience and attentive observation.

If you don’t belong to the group of hard gainers, beginners usually have a simple rule. Just about anything that calls for muscle makes it grow. However, muscle growth should not be seen as confirmation of well-designed training, because at the latest after a few years, all these trainers come to the same point. Namely, the one on which no progress can be recorded. To resort to illegal, growth-promoting means is probably one of the nonsensical ways to go. It would be much more sensible to be professionally instructed by an experienced personal trainer to continue to make visible progress and to not only maintain one's own health, but possibly also to improve it.