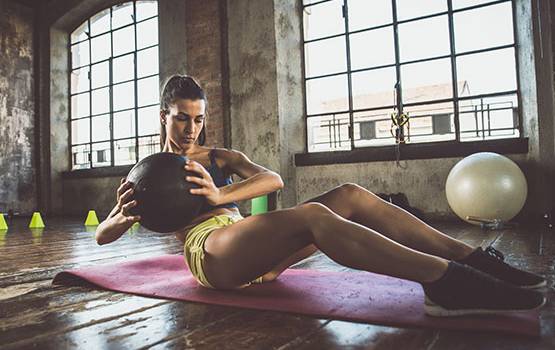 In the meantime, training alone is no longer sufficient. No, it also has to be functional! Sounds like this is a completely new realization, a functional training here, functional training there. Look at all those interesting exercises... One makes squats on a bosu, the other even biceps curls. Trainers let their clients do basketball throws with medicine balls to improve the throwing power. Revolutionary right? Not really if you ask us ...

Today, fitness gurus throw the term functional training around them as if the training had been reinvented. Even though the trend may have already passed its peak, the after effects are still noticeable. But what does Functional Training actually mean? When does an ordinary workout become functional?

To train functionally means that one can use the learned in training in another situation advantageous, or transfer what he has learned to other situations. Situations can be specific sports such as football, tennis, boxing, etc., but for the majority it is everyday life. Which situation a squat on the boss or even better a bicep curl is able to prepare me remains puzzling. To believe that stability improves on solid ground when trained on shaky people is a fallacy. Who trains squats on a Bosu, trains only one, namely squats on a boss. It's that simple. If someone wants to be incredibly good at it, should he continue to do so, otherwise there is much more meaningful thing to do with his time in the gym.

If our goal is to become or stay fit, based on what we are confronted with in everyday life, we should first ask ourselves which movements are most natural for us humans. The easiest way to understand this is to watch little kids. You have not had a year-long sit-in marathon behind you. They naturally like to move and much, unlike the comfortable adults these days, who have fulfilled their goals with a few training sessions a week.

Children play for a felt eternity in the deep squat, pick up objects with a straight back from the ground, instinctively load the hips instead of the spine during movements, reach up with a sturdy trunk to get something that stands on the table that is too high and express out of sheer boredom, out of curiosity, or other reasons objects from place. One thing is for sure, what are normal, unproblematic movements for children is already a motor and coordinative peak performance for most of us, even though many are unaware of it.

Most adults need to learn those movements that were once normal for all of us. Thus, the basic exercises, i.e. squats, deadlifts, military press and pull-ups combined with mobilization exercises are our best tools to accomplish this.

The basic exercises help us to learn correct movements and train our muscles in their function just as they are used in everyday life. Some people will now argue, "I do not think people practiced dumbbells in the Stone Age". Probably true. However, people did not sit in chairs during the Stone Age, or they used an elevator instead of climbing a mountain. Nor have they bought their food in the supermarket or have it delivered. In short, other circumstances require other measures.

We should try to restore in training what has been taken from the everyday life of our modern society. That is probably the most meaningful definition of functional training. All basic exercises are quite natural movements, even if this may not seem so at first glance. Picking up something off the ground (deadlift) seems more natural than a squat with weight. But a squat in itself is just as natural, the weight only serves to set a so-called suprathreshold stimulus to effect an adjustment of the muscles, the fascia and the skeleton. Strength training provides a healthier and more stable body.

That does not mean that we do not need sports like jogging, football, tennis and the like, on the contrary. Just about every sport, done in moderation, does the body good. But from any sport you can draw so much profit for everyday life and other sports, as from the strength sports.

When it comes to competitive athletes, it makes little sense to want to imitate the sports-specific movement sequences in functional training. These are best practiced in training the respective sport. Strength training as a supplement, however, can be meaningfully used for more strength, stability and improved intramuscular coordination.

Conclusion: Correctly performed strength training is in most cases the best functional training.