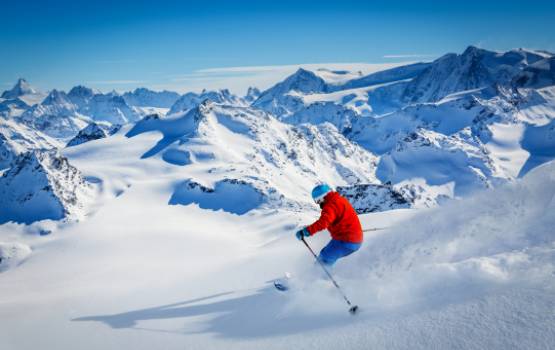 Winter sports are very popular with many Germans. Many travel at least once every year to ski or snowboard in the mountains, a very nice thing, with a little catch. Many who regularly go skiing for the rest of the year do little or nothing at all during the rest of the year and spend most of their everyday time sitting at their desks.

When skiing / snowboarding, however, our body demands maximum performance. Both stability and coordination are essential to arrive safely below. However, it’s not easy for our bodies to adapt to this burden without being well prepared. This leads to restrictions when driving, as well as to an increased risk of injury.

Good winter sports preparation is in any case essential. Often we are also confronted with this desire from the customer side, but just as often we are asked if it is even possible to complete an effective preparation in the gym.

The answer is in a nutshell: Yes! In order to train functionally, one does not have to imitate the movements of a sport, in this case those of skiing and snowboarding in a modified form or even train on the slopes. It's all about training and training the muscles involved in skiing and snowboarding as well as the nervous system. And there are plenty of resources available in the gym.

At no time does a loss of tension take place in the body during the course of the movement. An example of this would be a squat. For Category 2 movements, all the conditions are the same, except that during the course of the movement there is a loss of tension and the body must learn to re-stabilize within fractions of a second in the final position.

First, it must be determined by a body analysis, where the individual strengths and weaknesses are, so that subsequently can be turned correctly. Often not only strength (endurance) and coordination are a problem, but also limited mobility due to our everyday life.

In all cases, only after a detailed body scan, we develop an individual training concept. It’s important in most cases, especially to train category 2 movements.

Let’s explain it shortly. Movements of category 1 are characterized by the fact that a starting position is taken, a movement sequence is carried out and the subsequent end position resembles the starting position.

An example of this would be a simple jump, or to complicate it, a one-leg jump that requires landing without a double jump. The loss of tension takes place after the body has lifted off the ground. When landing, the entire body must be stabilized very quickly so that no injuries occur.

Such training not only affects the muscles but also has a very positive effect on the nervous system. The whole thing makes sense, because similar processes are constantly demanded by our bodies during skiing and snowboarding, so that what you have learned can be used for winter sports.

If you are interested in effectively preparing for winter sports, don’t hesitate to arrange a trial preparation with us. We are looking forward to hearing from you!